Each week, your team will play 12 games, making for a 144-game season. Each week's games are all played on Tuesdays, using each players' performances from the appropriate year.

We must receive any lineup changes by Monday to be able to use them for Tuesday's games. You can send in your lineups and ranking sheets from the Scoresheet website (recommended), by e-mail, or by fax. If sending lineups by fax or e-mail, please send them in by the preceding Friday so that we have time to enter them and check for errors before playing games Tuesday morning. Once games are played, they are final! Lineup changes, especially when the year being used changes, are very important. If using postal mail, give the Post Office plenty of time to get your changes here!

You can make unbalanced trades (for example, 3 players for 2), starting the season with a 36-man roster. However, you cannot list more than 30 players on a lineup card. Any players not listed on a lineup card WILL stay on your team's roster, and will be used before any (AAA) players are called up. Also, your team will not have more than 8 pitchers and 16 position players appear in a single game.

Trading of players is allowed until the 10th week of the season. Scoresheet will review all trades to avoid unfair collusion between team owners. We must receive confirmation from both of the teams involved in any trade. There is a 'Report a Trade' link on your league's website, which is the easiest way for teams to notify the Scoresheet office of trades. When you make a trade, we need a new lineup from you (with the players you've traded away removed from your lineup and any new players listed that you want to use in your lineup).

If the Roster Balancing feature is turned on, the "Plus Sign Option" allows you to draft a player even if you already have a player at that position by putting a plus sign (+) next to a player's number on your ranking list. For instance, you may have already drafted a third baseman (3B), but a second 3B is still undrafted when his spot at the top your list is reached during the draft. If you have a plus sign (+) next to the second 3B's player number, the draft system will draft that player even though you already have a third baseman.

A plus sign will only override Roster Balancing for one extra player at each position. For example, you could get a second shortstop, or a 4th starting outfielder, before you get a starting catcher. However, you will NOT get a second backup at a position before you get a starter at all other positions. Once you get a "plussed" player, he counts at that position for Roster Balancing purposes. We feel that the Plus Sign Option should be used sparingly (if you decide to use it at all). Do not overuse the Plus Sign Option. Our Roster Balancing procedures are designed to help you get a balanced team. We recommend keeping the number of plusses you use to under 10! The Plus Sign Option is the reason that some teams may NOT have a starter at every position at Round 14, or have a starter and backup players at every position by Round 29.

Example of "Plussing" a Player:

The screen shot image below shows that that a team owner has 'plussed' the last two players noted on his list, Howard Johnson and Tony Gwynn: 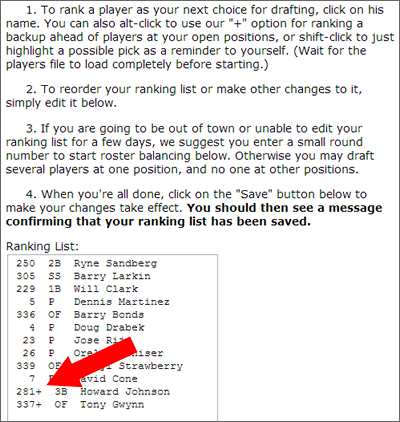